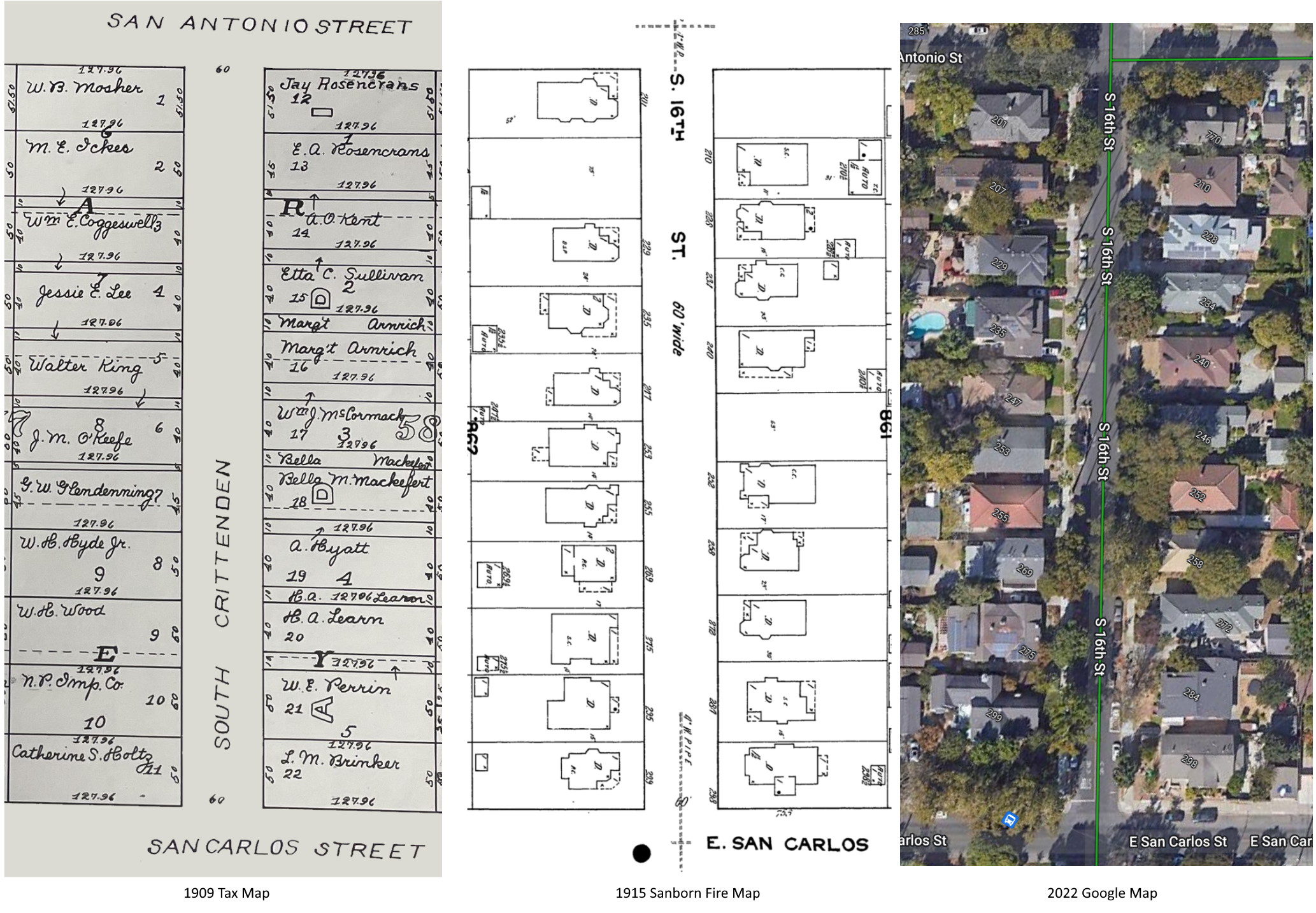 Built in 1907 by William B and Nellie (Miller) Mosher. He was clerk for the Railway Mail Service (RMS).  They had three children who lived in the house: Hugh, Lucile and Wilhelmina, born 8 Feb 1908. Hugh graduated from Stanford, and became an executive of a chemical company in New Jersey. Lucile went to SJSU & Berkeley, and became a teacher. By 1920, the Moshers were living in San Francisco

Owned by E Jay Rosencrans as late as 1935. Built by Mildred A. Wilcox in 1936 after settling the estate of her late husband, Irving, a Santa Clara Fruit mogel. She is listed in the 1938 City Directory, yet by 1940 she was residing in Hollister. The house then became the residence of Dr. and Mrs. Carl and Jean () Leonard. Carl was a local MD. Jean would become charter member and later president of the Revidio Club (to see again through other’s eyes). It was a women’s book club that would mushroom in size to include prominent guest speakers and charity events. Newspapers reference to the group end around 1981.

207 S. 16th (Block 57 Lot 2): The Cummins House
House not built until around 1921 for Anna Cummins, a widow. Her only daughter, Gladys, married George M. Fontaine, manager of Hale’s department store.  Unfortunately, Gladys died young in 1915 leaving Anna a grandson name George K. as her only heir. Anna lived with her son-in-law and grandson until she moved to her new house on 16th. When George M. remarried, Anna gained two step granddaughters: Joan Fontaine and Olivia deHavilland.

210 S. 16th (Block 58 Lot 13): The Rosencrans House
Ella Rosencrans, widow to Anson, who died in Wisconsin in 1905, lived her with her son, Jay. They owned lots 12 and 13, but lot 13 was never not developed by them. Before moving to the neighborhood, the Rosencrans family lived in Berryessa where Anson worked as an orchardist. Ella had a very famous brother, Francis Marion Smith, or better known as the “Borax King”. He discovered the mineral in 1872 in Nevada, and developed the mining of it. He became fabulously weathy. Ella and Jay are buried in the family mausoleum in Oakland.
From “The Rosenkrans Family in Europe and America” by Allen Rosenkrans, 1900

Anson C. Rosenkrans, son of James Oliver was born April 4, 1840; m. March 28, 1867, Ella Smith, born 1844, and lives on a ranch in Berry Essa, near San Jose, Cal., fifty miles from San Francisco. In a letter dated Jun 9, 1897, he reports that he raises on his ranch apricots, peaches, plums and a variety of cherries. He sent me a card announcing his daughter’s recent wedding and closed his letter with a postscript says that “the latch string: hands out for me in case I shall ever visit California. Long live and happiness to him and his family. His children are: E. Jay, another son whose name is not deciphered, Blanche Marie, and Henrietta Smith, departed.

229 S. 16th (Block 57 Lot 3): The Jefferson House
Eugene A Lee original owned and developed the house, but by T.B. Hubbard. However, the first resident of the house was Charles G and Hattie Jefferson, who was treasurer of Providence List & Trust Company. He died, however, in 1907 so his estate was transferred to William E. Coggswell who was the brother of Hattie. After the death of Charles, the house had a series of renters until 1912 when Hattie moved into the house.

Sunnyvale, June 19, Charles G. Jefferson, the treasurer of the Goldy Machine Company, died at his home Monday. Mr. Jefferson was 40 years old and was very vigorous in health. He was be very much missed by the people of Sunnyvale.

Mrs. Hattie R. Jefferson, 47 years of age, died at Los Angelos last Saturday. The body will arrive here this morning and well be at the chapel of Wood & Shannon, 921 Twelfth street, pending funeral arrangements. The deceased was the widow of Charles Jefferson, who died in 1907. Before going to Los Angeles two years ago she had resided at San Jose. She was a sister of Mrs. Minnie Appling of Hickman and W.E. Cogswell of Sacramento.

Alfred O. Kent became the original owner of the property in 1906. He then contracted Charles L Burdick, a carpenter, to build the house. He also married the builder’s daughter, Maude Lucia Burdick in 1908. They were not the first occupants of the house. That honor goes to Glen C Cunningham who has married Agnes Reed in 1907.

235 S. 16th (Block 57 Lot 4) The Henning House
Yet it the daughter Carol who is the most noteworthy of this group because Carol would become the first wife of John Steinbeck.

234 S. 16th (Block 58 Lot 15) The Sullivan House
The house was likely built in 1906 by Milo Hughes, a carpenter, who originally purchased the property from the Naglee Park Improvement Company in 1905. However, Milo soon left for Los Angeles, and by 1908 John Wesley and Etta (McReynolds) Sullivan lived there with Etta listed as owner on the 1909 Map. John had a modest sounding occupation of “farm laborer”, but he was appears to have some means. He was born in 1860 as a California native, son of large pioneer family with extensive holdings in Napa County. Etta was daughter of another large pioneer family, and they farmed with their family of five boys in Redwood located in Santa Clara county. By 1910 only the youngest son remained in the household when the family moved to Crittenden street. By 1920 they had left San Jose, settling in San Francisco with other son.

247 S. 16th (Block 57 Lot 5): The King House
The third of three houses developed by Eugene A Lee in 1906. He sold the land to Walter King in 1907. Walter worked as a salesman for the Farmer’s union.
From “The San Jose Mercury News”, 14 Nov 1942
Funeral services will be held this morning for Walter King, 61, member of Clayton’s Realty firm, who died Thursday after a long illness. King, a native of Illinois, came to San Jose in 1903 when he went to work for the Farmers Union. He left San Jose in 1918 to work in Salinas and San Francisco. He returned here in 1938 and had lived here ever since. He leaves ahis widow, Mrs. May King; a daughter, Helen King Germino, and a son, R. Waldo King.

253 S. 16th (Block 57 Lot 6): The O’Keefe House
John M O’Keefe owned the property and lived there in 1908. However, during the 1910 census, we see Frank V McPeak soon rented the house, and lived there with his family over the next several years. Frank was a civil engineer.

Born in San Jose, CA on May 17, 1909. O’Keefe was a graduate of San Jose Teachers College and the CSFA. From the 1920s she painted watercolors of the orchards and fruit pickers of Silicon and Santa Clara valleys. A spinster and lifelong resident of San Jose, she died on Jan. 16, 1997. Exh: San Francisco Art Association, 1937-40; San Jose Art League, 1997 (memorial).

255 S. 16th (Block 57 Lot 7)
Likely built by Glenn R Lumbard around 1907. He was a local land developer who developed many properties in the valley. He sole it Wilbur. He sold it to George W Glendenning, an orchanist, who had property in Santa Clara, but he likely never lived there. The first occupant was Eva Stahl and her daughters. The house was likely vacant during the 1910 census. Then in 1911, Donald and Helen Liddle, with their daughter May, arrived for the next few years. He worked as a watchman for the Farmer’s Union, the same place as Walter King, two house over.

269 S. 16th (Block 57 Lot 8): The Shaw House
Likely built by Glenn R Lumbard around 1907. He was a local land developer who developed many properties in the valley. He sole it Wilbur. He sold it to George W Glendenning, an orchanist, who had property in Santa Clara, but he likely never lived there. The first occupant was Eva Stahl and her daughters. The house was likely vacant during the 1910 census. Then in 1911, Donald and Helen Liddle, with their daughter May, arrived for the next few years. He worked as a watchman for the Farmer’s Union, the same place as Walter King, two house over.

First owned by Wilfred and Bertha Perrin, but never developed. They sold the property in 1913 to Clifton D and Mabel (sutfin) Cavallaro, a local lawyer. House was likely built in 1914 as the first city directory occurs in 1915.

from “The San Jose Evening News:, 20 Oct 1913
D.C Cavallaro Plans Attractive New Home
A building contract for $2250 five-room cottage was signed today and filed in the recorder’s office between Attorney C.D. Cavallaro, the owner, and P.H. Schmidt, Victor Seeman and William Slather, contractors. The handsome cottage is to be built on 16th street, and will be occupied by Mr. Cavallaro himself. Charles S. McKenzie was the architect for the cottage.