William and Mary Baker are our immigrant Baker ancestors, arriving around 1660 to Concord, Massachusetts with their young son, William Jr. They arrived after the “great migration” (1620-1640) when the large influx of Puritan English emigrated to Massachusetts. The English Civil War (1642-1651) put a stop to that first influx. Our William Baker would have arrived from England as part of a second wave after the death of Puritan Oliver Cromwell in 1658 and the restoration of Charles II as King of England in 1661. Without going in the details here, this Baker family has proven to be a tough nut to crack, despite several efforts to learn more about them.

The entire tree for William and Mary Baker is available online at Casa de Schwartz using a program called “The Next Generation of Genealogy Sitebuilding” or TNG for short. The database attempts to capture every descendant with a Baker surname up to their listing in the 1940 Census. It includes available evidence, focusing on vital records, censuses, obituaries and cemetery listings.

The Branches of the William & Mary Baker Tree
A four generation tree is shown below. Note that one male survived for the next two generations after William and Mary. Therefore all known male Bakers can trace their ancestry to Joseph & Alice (Jefts) Baker. This has reduced the overall number of descendants somewhat. Nevertheless, we are left with several surviving branches. I am part of the Joseph and Sarah (Wheeler) Baker branch through their son, Peter Baker, who served in the Revolutionary War.

Articles
I have written a few detailed articles about our Baker ancestors. Click on the links below to read them 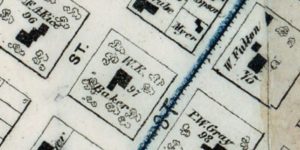 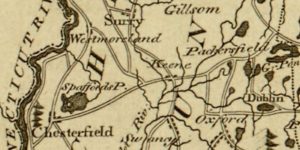 A look at the life of Peter and Lydia (Dudley) Baker, along with a detailed examination of the accuracy of accounts 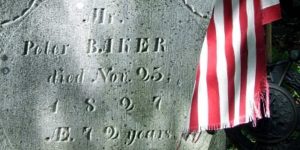 Peter Baker in the Revolutionary War

A look at the Revolutionary War service to the Baker Family, focusing on Peter Baker but including his brother Joseph and his father Joseph Sr. 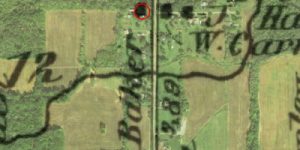 The James and Mary (Palmer) Baker has been found in Cambria Niagara, county, NY by blending old maps over new. 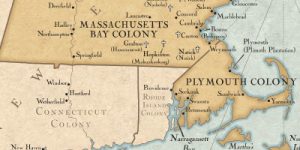 DNA Results
There are two relevant DNA test types: autosomal and Y-DNA. Autosomal DNA, common to Ancestry and 23&me, represents the DNA from all DNA sources including all your male and female ancestors. By the 5th or 6th generation, it becomes very difficult to analyze. For my case, my mother’s and my aunt’s DNA was able to show several matches to Peter and Lydia Dudley. Going one generation back to Joseph and Sarah (Wheeler) Baker, a single DNA match can be detected.

Y-DNA represents the DNA on the Y chromosome that a father passes to a son. It allows us to go very far back in time – all the way to immigrant William Baker and beyond. I have a male Baker cousin who tested, kit number 685995. It matches perfectly to another male Baker who shares Peter Baker as a common ancestor. Therefore we have two test types that show a link to Peter Baker. Currently, only the Joseph Baker branch has tested their Y-DNA. It would be like interesting for any other surviving member of the other branches to test.

The Y-DNA does not show a match to any other male Baker in the Baker Y-DNA database. This result means that William Baker is not, as of now, related to any other Baker immigrant who settled in New England around the same time, including Edward Baker of Lynn, Alexander Baker of Boston, and Francis Baker of Yarmouth.

Sources
Most credit must be given to previous researchers who did research the traditional way- by pouring over dusky books in county courthouses, or who wrote letters to strangers around the country. Here is a sampling of some of these works. Many are now available on the internet.

Very early Bakers lived in Massachusetts with its plethora of early town records (Thank you Puritans). In the early 1900's books were published by each town. This website has brought most together for easy viewing.

Littleton Town Records does not appear on the website above, so one needs to look through the records of Littleton directly.

Descendants of William and Mary Baker of Concord Mass. by Amos Baker, 1885

The original William Baker research used in books by Albert and Silas Baker. But you have to go Boston to read it.

Genealogy and history of the Baker, Andrus, Clark, and Adams families by Albert C Baker, 1920

Excellent source of early records, many unsourced, but available no where else. Includes Amos Baker research.

Again, well researched with photos, covered a branch of the family.

Well researched with a large number of sources identified. Available as an Amazon ebook for a very small fee.

Amylynne became so interested in her Baker research that she became a professional genealogist. She wrote a number of articles examining the validity of early unsourced Baker research.

Unpublished on the internet. Covers James Baker of Cambria NY line from the prospective of son Alden Dudley Baker

Unpublished on the internet. Covers James Baker of Cambria NY line from the prospective of son Palmer Baker