I have a particular fondness for the Baker subgroup. Harold had a sister, Ethel (Baker) Neff, who researched the family history and wrote “Historical Data, Anecdotes and Reminiscences” in 1949. It represented my start in genealogy. After the Revolutionary War, these ancestors left New England to settle newly opened lands in upstate New York. Unfortunately, records were hit and miss. While some of the inhabitants can be traced back into their early New England homes where the records can be quite good, others appear in New York out of thin air.

As we have done before, it is useful to look at the grandparents of Harold Baker as shown in the six generation tree with their associated color codes of navy (N) for Baker, blue (B) for male and pink (P) for female. These grandparents include Alden Dudley Baker (NBB), Eliza Blackmer (NBP), Robert Hill (NPB) and Augusta Wood (NPP). Maybe not surprising, but the two men have a more complete historical record than the two women. “Typical” results as my wife would describe them.

In terms of DNA, there is heavy reliance on ThruLines from ancestryDNA and cluster diagrams from Genetic Affairs. Both utilize the same shared matches to perform their magic. Since I have started these essays, there have been a few new developments. My aunt, initials of JD, sister of WAB, tested and allowed me to examine her results. Her ThruLines, which give subtly different results, were combined with WAB’s. Secondly, ancestryDNA no longer allows cluster analysis, so I am limited to analyzing her shared matches and ThruLines for now.

To the right is the Baker portion of the Genetic Affairs cluster diagram taken at 30 cM taken in Part 1. We see a nicely formed graph starting at Harold Baker (N) in the upper left, following by a cluster for Alden Baker (NBB) and Eliza Blackmer (NBP) and Eliza’s mother Marana Terry (NBPP). The mysterious red cluster labelled NNNN represents a whodat cryptocluster belonging to Elijah Knapp Fuller. He will be discussed later, but already we can tell that he connects to Marana Terry due to the gray dots. Missing are references to grandparents Robert Hill (NPB) and Adelia Wood (NPP).

If you have read the earlier essays, you will recognize that I take this Baker subgroup run at 30 cM, and use the extend-a-cluster technique of Genetic Affairs to create a Baker specific cluster analysis run down to 20 cM. I then try to incorporate the six generation tree for Harold Baker into the 20 cM analysis. Genetic Affairs has trouble with creating well formed clusters at this level. So, I use a modified version of the html file developed by my oh-so-helpful son to create reference clusters and to rearrange shared matches. Finally, I make my best guess for the common ancestor for each cluster.

Genetic Affairs of Baker Subgroup in Three Versions: Original, Modified with guide lines and Final Modified for a Clean View

Ancestors of Alden Dudley Baker are well known and researched. Ethel Baker Neff knew Alden and talks about him in her memoir. She figured out that Peter Baker served in the Revolutionary War, and that William Baker first arrived in Concord MA from England around 1660. She also determined that Mary Palmer descends from Joseph Palmer by way of Puritan Walter Palmer of Stonington CT. I have extended the tree, showing, for example, that Joseph Palmer is descended from Mayflower Pilgrim John Howland. Not many shared matches cross the 20 cM threshold, which is typical of ancestors this far back. They can be found in Clusters 14 and 15. The ThruLines of all the families are shown, and all show matches to others that have been verified through traditional means.

The Robert Hill branch can be found in cluster 13. We have a pretty good understanding of the branch. Ethel traced the Hill surname back to Thomas Hill who served in the Revolutionary War. Sylvia Frost can be found in a very useful New England book “The Frost family in England and America with special reference to Edmund Frost and some of his descendants” written in 1909.

My main contributions were the parents of  Thomas Hill and Mary Williams. They came from Pomfret in Western Connecticut which was quite remote prior to the Revolutionary War, and records there can be spotty. The genealogical proof for Isaac & Ruth (Squire) Hill and Stephen & Judith (Paine) Williams has never been great. Hope springs eternal that the DNA will support my conclusions.

The ThruLines reasonably support this branch. Most give multiple shared matches, specially on the Frost side. We see a single match for Isaac and Ruth (Squires) Hill – a small, but important, confirmation. However, the ThruLine for Stephen and Judith (Paine) Williams lacks any match. More research will be needed to determine if this ThruLine might be uncovering a problem where I assigned the wrong parents for Mary Williams.or

DNA of Adelia A Wood (NPP)

Adelia Wood has always posed a research challenge. Her father, Stephen Wood, represented my first brick wall. Stephen and Hannah (Sprague) Wood eventually became my best guess for Stephen’s parents, with enough evidence to add their names to the tree, but without a lot of conviction. I had found better evidence for the ancestry of Deborah Knowles. Yet it still surprises me that she seems to have no connection to her New York home of Knowlesville. I learned that Deborah had three children through a first marriage to Elijah Avery before having an additional three children with Stephen. Clusters 16 and 17 are unassigned. One or both may be a good candidate to connect with Adelia.

When I look at the ThruLines of Stephen & Hannah Wood with their parents (David & Dorothy Wood and Elenezer & Hannah Sprague), I find common ancestors. While this result does not constitute proof, it is encouraging. I am more convinced than ever that the correct parents for Stephen Wood have been identified. The ThruLine results for Deborah, on the other hand, are decidedly weak. While I see one shared match for Thomas & Elizabeth (Walker) Knowles, there are no shared matches for Edward & Christian Knowles, Jonathan & Elizabeth Hathaway or any children from Adelia’s first marriage. So the DNA provides a reversal of fortunes. The DNA giveth and it taketh away.

Seven ThruLines for Adelia A Wood Branch of Baker Subgroup

Now we come to Eliza Blackmer, the most interesting of the DNA results. Ethel knew so little about Eliza, she even misidentified Eliza’s parents in her genealogy. Some progress was made with the identification of Homer Blackmer and Marana Terry. Yet brick walls quickly emerged for Aurilla Limekins, Hiram Terry and Clarissa Searles.

Despite this lack of knowledge, a massive NBP supercluster dominates the Genetic Affairs chart. I was further able to differentiate the NBP into subcategories on Marana Terry’s side, NBPP, with her parents Hiram Terry (NBPPB) and Clarissa Searles (NBPPP). We have seen large superclusters in both the Perkins and Woods families so no surprise here. Clusters 4, 6 and 8 are particularly large, and may be pseudoclusters as discussed in Part 2.

The Homer Blackmer (NBPB) side of the tree acts as expected. No reference matches for Nathaniel & Aurillia Blackmer and Soloman & Janet Blackmer are able to cross the 20 cM threshold. However, their ThruLines show plenty of shared marches under 20 cM. There is not yet enough detail to even speculate about Aurilla Limekins although clusters 1, 4 and 5offer a good starting point.

It is the Marana Terry branch that stands out. Four shared match across the 20 cM threshold for a NBPP, and one shared march across the 20 cM for NBPPB (Hiram Terry). This later match is hard to see in the cluster diagram but it is important because it allows us to differentiate NBPPB’s from NBPPP’s, and identify pink cluster 8 as Hiram’s side. So let’s take a step back and examine the surviving record of Hiram Terry and Clarissa Searles to see what we can add to the tree.

All of this information comes from one individual: a grand daughter of Zelpha who was trying to piece the story together back in the 1980’s. All trees, including mine, seem to reference her work. In my research, I have seen no record for Clarissa Searles. I have seen no evidence that Hiram fathered 22 children. This story may be anecdotal, meaning it may have grains of truth.  I do show using census records that the family moved from Berkshire county, MA to Livingston county, NY around 1800. Children of Hiram state via the 1880 census state that Hiram was born in MA or CT, and that Clarissa was born in VT or CT. I think I have identified seven children, nowhere near 22. The Trueline of Hiram and Clarissa only confirms two children so far. Finally, I found the gravestone for our Hiram (b. 1748, c. 1840) buried in Michigan with his son Hiram Jr.

AncestryDNA tries to offer suggestions based on the trees of other researchers who generated various birth and death dates. Take a look at the ThruLine for Ebenezer and Mary (Helme) Terry. Notice that Hiram is listed twice. Analysis of the genealogical record leads to the conclusion that Ebenezer and Mary had a son (b. 1737, d. 1782 ) and at least one grandson (b. 1763, d. 1802) named Hiram. Neither branch is correct since both died before Marana’s birth in 1806. Yet Ebenezer and Mary have three unique matches in the ThruLine who are likely common ancestors of WAB. My best guess without any proof is that our Hiram may be another grandson of Ebenezer and Mary. 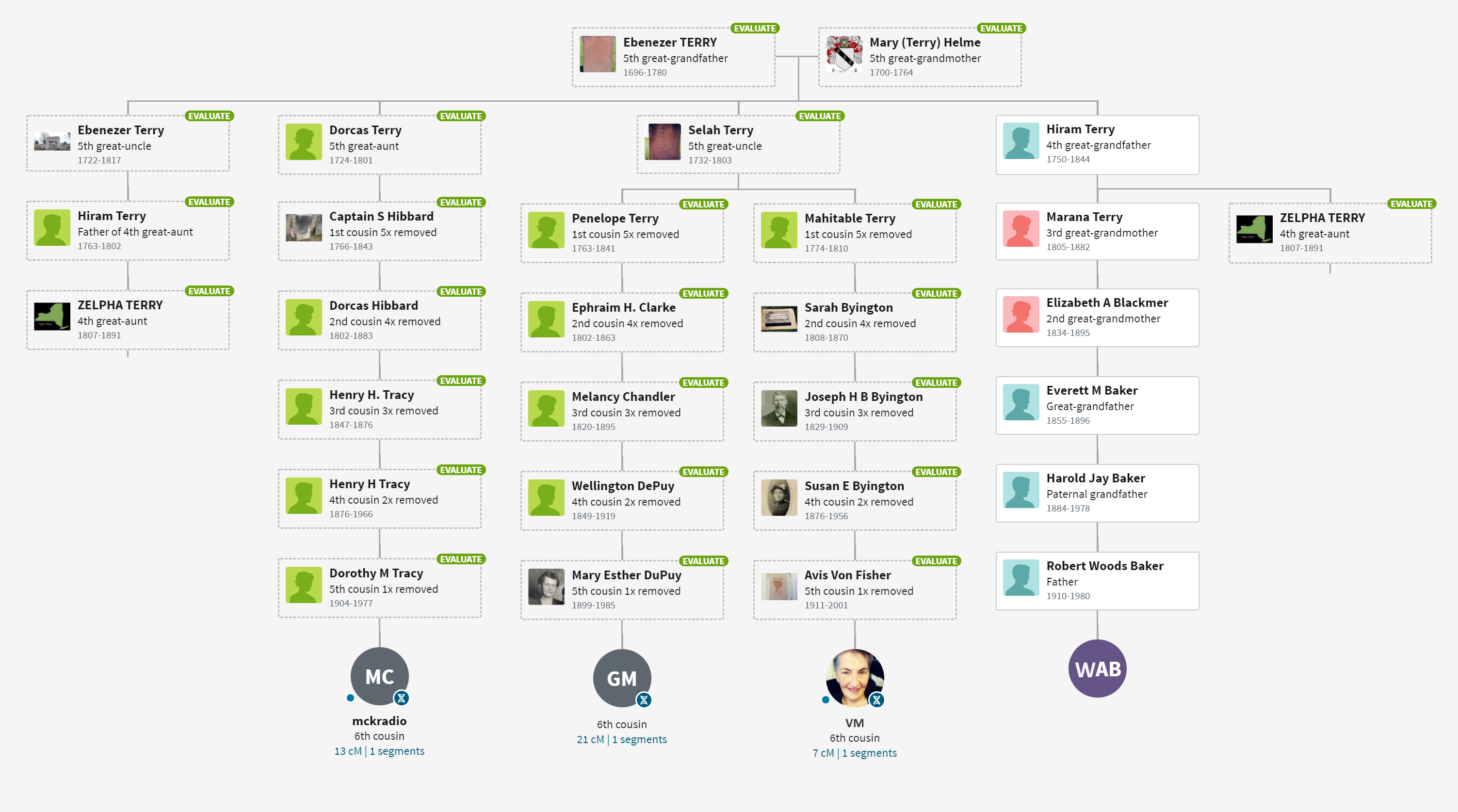 I have an admission to make. The NBPPP reference squares are mostly NNNN’s for my whodat cryptocluster, Elijah Knapp Fuller. You cannot distinguish the two, meaning that Clarissa Searles and Elijah are closely related. Elijah started his life in Greene County, NY, moved to Illinois, then Utah as an early member of the Church of Latter Day Saints. Married 6 times, with 33 children, Elijah’s DNA is bound to show up in a lot of ancestry samples. More importantly, the half siblings lived in a small community in Utah where multiple related marriages would be unavoidable. From a genealogical perspective, the shared DNA of these descendants gets magnified. Therefore, we see a lot of shared matches to WAB that are able to cross the 20 cM threshold.

Clarissa Searles, if that is her correct name, must somehow be a Fuller. Her birth date must be estimated based on the census (b. 1761-1770 per the 1830 return). For better insight I constructed a TrueLine showing the Fuller family. Still not clear where she fits, but notice there are individuals named “Clarissa” and “Zilpha”. If I had to guess, I would put money on John Fuller and wife Dorcas Fuller (unrelated to each other) as the common ancestors. If this scenerio is true, then John and Dorcas would be a NBPPPB and NBPPPP. I tried forcing ancestryDNA to analyze this scenerio, but it does not run. Ancestry keeps including erroneous user submitted trees.

DNA results of the Baker subgroup have validity for the entire six generations associated with Harold Baker. That is back to the early 1700’s. We got some nice clues on the extending the tree with Hiram Terry and Stephen Wood, and we got warnings regarding the lineage of Deborah Knowles and Mary Williams. We also witnessed the effect that polygamy can have on shared DNA.  The DNA clearly strengthened our understanding of this line.